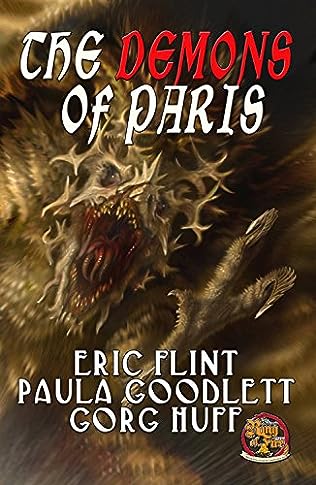 It is January of 1372 and the space-time continuum has been breached by a great rift. Demons, imps, and spirits, evil and benign, spill into the universe from the netherworld.
In Paris, a series of grisly murders that couldn’t possibly be performed by a human, no matter how depraved, leads the Grand Chatelet and his men to try and raise a demon of their own to learn how to combat the creature that is terrorizing the city.

Unfortunately—or perhaps, fortunately—the demon who is summoned brings with him a van from the Paris of the twenty-first century. The van contains a modern-day drama teacher, her son, and eight precocious high school students—along with all of their electronic devices. Soon, their laptops, tablets, and cell-phones become possessed by imps and spirits of the netherworld, some of whom are brilliant and all of whom are insatiably curious.

Soon it’s a race to see which pack of outsiders can create the most turmoil in the late Middle Ages—monstrous demons or precocious teenagers who soon have their own allies and followers among the ranks of demonkind.

And King Charles V had already been in trouble! Piled onto his own poor health, a suspicious and contentious church, France’s always-quarrelsome nobility—worst of all, his unscrupulous and ambitious brother, Philip the Bold—the king now has both demons and people from the future to contend with.

He does have one asset—and not a small one. He can place his trusted Constable of France, Bertrand du Guesclin, in charge of the rambunctious teenagers from the future and their ever-growing legion of demons. And Bertrand has a great asset of his own—his wife Tiphaine de Raguenel, perhaps the best astrologer in all of France and, for sure and certain, not a woman to take seriously the prattling nonsense of youngsters skeptical of her lore and knowledge.