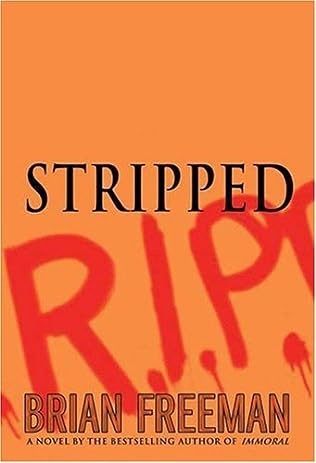 In this stunning follow-up to Brian Freeman’s remarkable debut novel, Immoral, Detective Jonathan Stride discovers that there are only two ways to go in Las Vegas.  You can hit the jackpot.  Or you can get Stripped…

Two murders have shocked the city of Las Vegas. Two victims with nothing in common, two deaths without a motive. Detectives Jonathan Stride and Serena Dial are under pressure to get these crimes out of the headlines. But exposing the truth might just get them killed.

They looked like isolated cases: a hit-and-run and a celebrity murdered during a fling with a prostitute.  No one could ever imagine they’d be linked to a brutal crime in Las Vegas’s steamy past–and that the race against the clock to corner a determined serial killer would stir up secrets long thought buried with the dead.  As detectives Jonathan Stride and Serena Dial are called separately to investigate, they have no idea what they’re stepping into: a world where desperate ambition rules and loyalties know no bounds, and where their own uncharted emotions and sexual desires will reach an explosive conclusion.

Shocking, twisted, with edge-of-your-seat suspense, Stripped pushes the limits of its heroes and keeps the reader turning ever page until the last plot twist