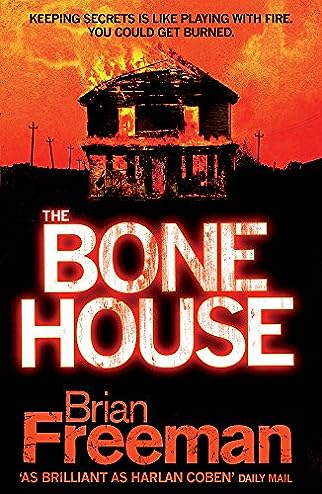 Keeping secrets is like playing with fire. You could get burned…

A teenager murdered. A teacher accused. A secret that won’t stay buried…The Bone House is the unforgettable murder mystery by Brian Freeman, author of The Night Bird and The Voice Inside. Sure to enthrall fans of James Patterson and David Baldacci.

Hilary and Mark Bradley are trapped in a web of suspicion. Last year, accusations of a torrid affair with a student cost Mark his teaching job and made the young couple into outcasts in their remote island town off the Lake Michigan coast. Now another teenage girl is found dead on a deserted beach. . . and once again, Mark faces a hostile town convinced of his guilt.

Hilary Bradley is determined to prove that Mark is innocent, but she’s on a lonely, dangerous quest. Even when she discovers that the murdered girl was witness to a horrific crime years earlier, the police are certain she’s throwing up a smokescreen to protect her husband. Only a quirky detective named Cab Bolton seems willing to believe Hilary’s story.

Hilary and Cab soon find that people in this community are willing to kill to keep their secrets hidden–and to make sure Mark doesn’t get away with murder. And with each shocking revelation, even Hilary begins to wonder whether her husband is truly innocent. Freeman’s first stand-alone thriller since his Stride novels is a knockout.