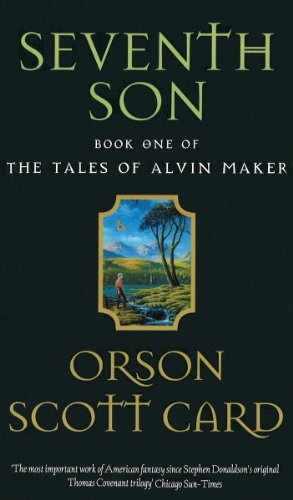 In an alternate version of frontier America, young Alvin is the seventh son of a seventh son, and such a birth is powerful magic. Yet even in the loving safety of his home, dark forces reach out to destroy him.

Seventh Son begins the story of Alvin Maker, the seventh son of a seventh son growing up on the American frontier in the early 1800s–in a world where the talents we call folk magic really work.

Here we meet the young Alvin Miller, the seventh son of a seventh son. Alvin is a Maker and is destined to create a positive new future for America. But to do so he must defeat an ancient enemy, the Unmaker, whose dark magic and deadly plots constantly threaten Alvin’s existence. Not only is Orson Scott Card one of the most popular science fiction novelists alive, he is also one of the strongest and purest voices in American fantasy.