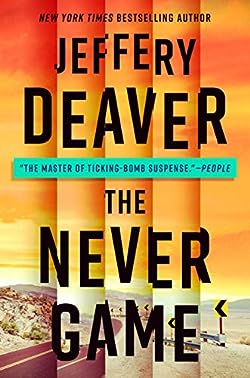 You wake up all alone, in the middle of a forest, miles from anywhere.

Beside you lie five objects – a lighter, grease, picture-frame wire, a piece of silk, a bottle of water – which you will need to use if you want to survive.

You’ve been taken by the Whispering Man and there is no escape. He makes the rules and nobody ever gets out alive.

Enigmatic investigator Colter Shaw is fighting to stop the murders. But another victim has been snatched from her family and he’s running out of time.

In the darkest corner of Silicon Valley, a new breed of killer is emerging: someone with a deadly obsession, whose twisted game is spiralling out of control.

A young woman has gone missing in Silicon Valley and her father has hired Colter Shaw to find her. The son of a survivalist family, Shaw is an expert tracker. Now he makes a living as a “reward seeker,” traveling the country to help police solve crimes and private citizens locate missing persons. But what seems a simple investigation quickly thrusts him into the dark heart of America’s tech hub and the cutthroat billion-dollar video-gaming industry.

When another victim is kidnapped, the clues point to one video game with a troubled past–The Whispering Man. In that game, the player has to survive after being abandoned in an inhospitable setting with five random objects. Is a madman bringing the game to life?

Shaw finds himself caught in a cat-and-mouse game, risking his own life to save the victims even as he pursues the kidnapper across both Silicon Valley and the dark ‘net. Encountering eccentric game designers, trigger-happy gamers and ruthless tech titans, he soon learns that he isn’t the only one on the hunt: someone is on his trail and closing fast.