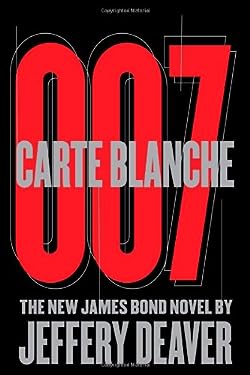 James Bond is back. And in Carte Blanche, he is just out of Afghanistan, seconded to a new security agency — one that is a distinctly separate entity from MI5 or 6. A decryption reveals that Britain is harbouring a vicious clandestine figure, and a great many people are to die — within a week. 007 is in action in his own country for once, his hands tied by an irritating bureaucratic colleague, and up against a sinister opponent who luxuriates in the sights and sounds of death and putrefaction. And if the latter sounds like the kind of villain Lincoln Rhyme might be taking on, that’s because 007’s new chronicler is the American writer Jeffrey Deaver, creator of the quadriplegic criminologist Rhyme.

There is now a long and impressive tradition of continuing the literary adventures of Ian Fleming’s superspy after his elegant creator’s death, and it has to be said that the results have been only fitfully successful. The first post-Fleming Bond novel, Robert Markham’s Colonel Sun, was a lovingly crafted tribute by a pseudonymous Kingsley Amis, and did considerable justice to the original concept. The entries by the American writer Raymond Benson were generally received with less enthusiasm (proving that Benson’s considerable knowledge of Bondiana did not constitute sufficient credentials for the task), and while the veteran thriller writer John Gardner’s entries began strongly, he appeared to lose interest in the project; the last two books in his 007 sequence were workaday, to say the least. Sebastian Falk’s recent entry, Devil May Care, placed Bond back in the Fleming era, and was a diverting outing.

James Bond, in his early thirties and already a veteran of the Afghan war, has been recruited to a new organization. Conceived in the post-9/11 world, it operates independent of MI5, MI6 and the Ministry of Defense, its very existence deniable. Its aim: To protect the Realm, by any means necessary.

A Night Action alert calls James Bond away from dinner with a beautiful woman. Headquarters has decrypted an electronic whisper about an attack scheduled for later in the week:

And Agent 007 has been given carte blanche to do whatever it takes to fulfill his mission . . .