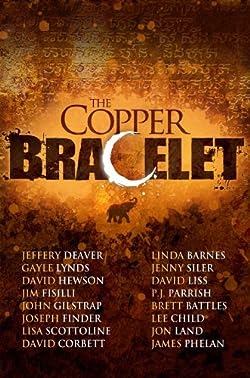 Harold Middleton returns in this explosive sequel to The Chopin Manuscript as he’s drawn into an international terror plot that threatens to send India and Pakistan into full-scale nuclear war. Careening from Nice to London and Moscow to Kashmir to prevent nuclear disaster, Middleton is unaware his prey has changed and the act of terror is far more diabolical than he knows. Will he discover the identity of the Scorpion in time to halt an event that will pit the United States, China, and Russia against each other at the brink of World War III?

The ‘Volunteers’ is a small group of clandestine good-guys that goes after bad-guys with the aid of alphabet soup named organizations across the world.

A follow-up to the award-winning The Chopin Manuscript, The Copper Bracelet brings together 16 of the world’s most celebrated thriller writers including Lee Child, Joseph Finder, David Hewson, David Liss, and Lisa Scottoline to each write a chapter of this pulsing tale. Once again, Jeffery Deaver set the story in motion, and brings it to its shocking finale.

The first two books in the series, The Chopin Manuscript and The Copper Bracelet, are collaborative efforts involving multiple writers – each author responsible for one chapter.