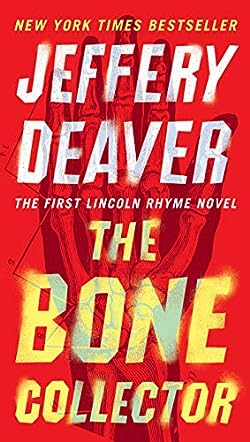 In his most gripping thriller yet, Jeffery Deaver takes readers on a terrifying ride into two ingenious minds…that of a physically challenged detective and the scheming killer he must stop. The detective was the former head of forensics at the NYPD, but is now a quadriplegic who can only exercise his mind. The killer is a man whose obsession with old New York helps him choose his next victim. Now, with the help of a beautiful young cop, this diabolical killer must be stopped before he can kill again!

On her last day as a street cop, before moving to a desk job, Amelia Sachs is sent to investigate a reported murder near the train tracks in a derelict New York suburb. What she discovers there is definitely not for the squeamish, and very soon Amie will be engaged in one of the most urgent and most dangerous manhunts the metropolis has ever witnessed.

Lincoln Rhyme was once a brilliant criminologist, a genius in the field of forensics — until an accident left him physically and emotionally shattered. But now a diabolical killer is challenging Rhyme to a terrifying and ingenious duel of wits. With police detective Amelia Sachs by his side, Rhyme must follow a labyrinth of clues that reaches back to a dark chapter in New York City’s past — and reach further into the darkness of the mind of a madman who won’t stop until he has stripped life down to the bone.