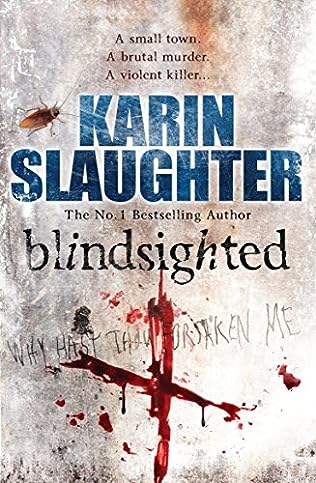 In Blindsighted (book one of an anticipated three featuring Grant County, Georgia, pediatrician and coroner Dr. Sara Linton), first-time novelist Karin Slaughter comes out swinging in true medical examiner fashion. That is to say, covered with blood from the get-go.

Without warning, the body jerked violently, pitching forward and slamming Sara onto the floor. Blood spread out around both of them, and Sara instinctively clawed to get out from under the convulsing woman. With her feet and hands she groped for some kind of purchase on the slick bathroom floor. Finally, Sara managed to slide out from underneath her. She turned Sibyl over, cradling her head, trying to help her through the convulsions. Suddenly, the jerking stopped.

Sibyl is, or was, Sibyl Adams, a college professor who had the misfortune of being drugged, savagely raped, slashed, and left for dead in the toilet of the local diner, to be coincidentally discovered by Sara Linton. Coincidences don’t stop there, and neither do the rapes and murders. The next is, unimaginably, still more gruesome than the first and it, too, is discovered by Dr. Linton. Police Chief Jeffrey Tolliver is Sara’s ex-husband, and mercurial detective Lena Adams, another major player in the ensuing drama, was Sibyl’s twin sister.

And the monster behind these increasingly more depraved acts? Suspects abound, from the diner’s jack-of-all-trades, Will Harris, to Victim No. 2’s boyfriend, to Jack Allen Wright who, a dozen years prior, raped Dr. Linton (that rape had been a secret until now). There are other possibilities, naturally, and it soon becomes apparent that Sara’s an intended target.