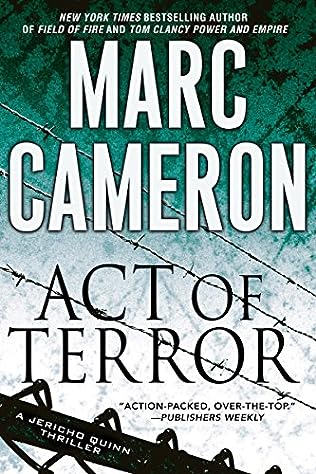 Warning: The next attack on American soil will come from within.

From coast to coast, our nation is witnessing a new wave of terror. Suicide bombers incite blind panic and paralyzing fear. A flight attendant tries to crash an airliner. A police officer opens fire on fans in a stadium. And at CIA headquarters, a Deputy Director goes on a murderous rampage. The perpetrators appear to be American–but they are covert agents in a vast network of terror, selected and trained for one purpose only: the complete annihilation of America.

Special Agent Jericho Quinn has seen the warning signs. As a classified “instrument” of the CIA reporting directly to the President, Quinn knows that these random acts of violence pose a clear and present danger. But Quinn may not be able to stop it. The search for terrorists has escalated into an all-out witch hunt. And somehow, Quinn’s name is on the list. . .

Quinn works for an OJA (“Other Governmental Agency”) and while an educated man, is basically a ‘blunt instrument’ and a protector of the citizens of the US – especially, by necessity, his own family. The book picked up right where the National Security left off. Jericho Quinn is trying to protect his family when he is attacked at home. Turns out there are now two groups after him.