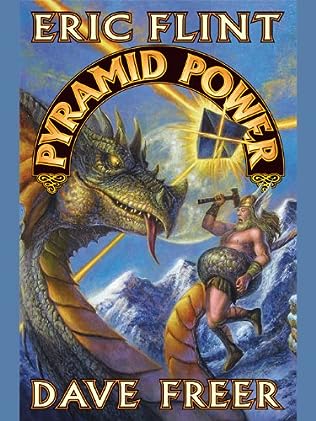 A mysterious pyramid appears in Chicago, oozing fantastic creatures and sucking humans into our own mythological past. It’s an alien invasion from within!

When a special forces team sent to capture an AWOL official gets into deep trouble with a certain one-eyed Norse god, redoubtable comparative mythologist Jerry Lukacs must rescue them, strike a deal with the droll and dangerous Loki, and risk bringing on Ragnarok itself to once again save human myth from alien domination.

The Pyramid had seemed to be inactive, still sitting in the middle of Chicago but no longer growing and wiping out buildings as it grew. The Krin device would have been thwarted, if things had been left as they were—but a V.I.P., who knows too many state secrets to be allowed to be missing, was left behind in the world of Greek mythology. So a power-mad Washington bureaucrat has press-ganged several of the survivors of the first excursion into the pyramid’s worlds and sent them, along with a team trained in “surgical strikes,” to either bring back the V.I.P. or, if that’s impossible, terminate him with extreme prejudice.

Unfortunately, instead of returning to mythological Greece, they find themselves in the world of the Norse gods. Even if they manage to survive the enmity of Odin and his warriors, can manage to free Loki (a potential ally) and can keep the hard-drinking thunder-god Thor off the sauce long enough to help them, Ragnarok is coming, with the end of the world. And even a hard-headed maintenance man with his trusty toolkit may have trouble fixing that problem!