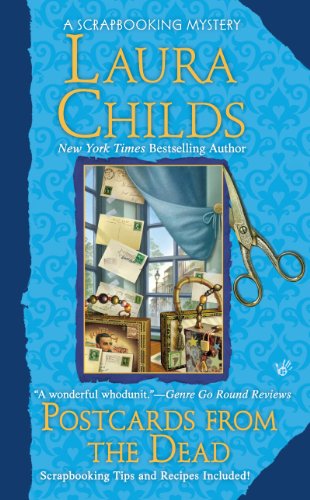 As a Mardi Gras parade rolls through New Orleans, Kimber Breeze, KBEZ-TV’s news anchor is strangled and hung from a hotel balcony. Carmela, who was next in line to be interviewed by Kimber, is horrified. But she soon discovers the nightmare isn’t over, because someone is leaving spooky postcards for her — signed by the very dead Kimber!

Kimber Breeze of KBEZ-TV is broadcasting live from a hotel balcony in the French Quarter, interviewing locals and capturing the spectacle in the streets. But as Carmela Bertrand, owner of Memory Mine scrapbooking shop, waits to be interviewed next, someone sneaks onto the balcony and strangles Kimber with a cord, leaving her body dangling above the parade.

Soon after the murder, Carmela begins receiving strange postcards at her shop—signed by the late reporter. Now she and her friend Ava must risk their own necks to find out who’s posing as a ghost and expose a killer…