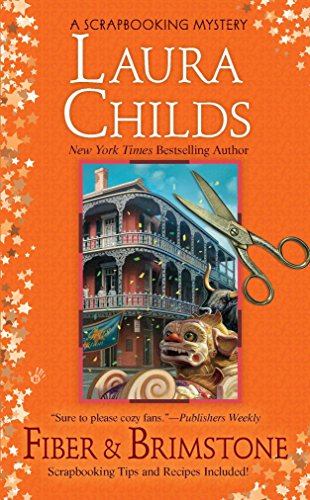 Book 8 in the Scrapbooking Mystery series (2010)

It’s Halloween in New Orleans-and the festivities are going to be killer.

With its history of spooky folklore, New Orleans offers the perfect atmosphere for Halloween. Scrappy sleuth Carmela Bertrand is getting into the spirit by building a giant puppet for the French Quarter’s Halloween Monsters and Mayhem parade. But things get terrifying earlier than expected when she overhears an argument between Jekyll Hardy and Brett Fowler-and minutes later, finds Fowler’s lifeless body.

With the help of her best friend Ava, Carmela Bertrand is building a giant monster puppet for the Halloween Monsters & Mayhem parade. Things get terrifying earlier than expected when they overhear an argument between Jekyl Hardy and Brett Fowler- and just minutes later they find Fowler’s dead body.

Carmela has known Jekyl for years and can’t believe he’d ever resort to murder, despite the fact that Fowler owed him money. But when another victim is discovered-who also had an unfriendly relationship with Jekyl-Carmela is convinced someone is framing her friend and now must find a way to unmask the real killer.