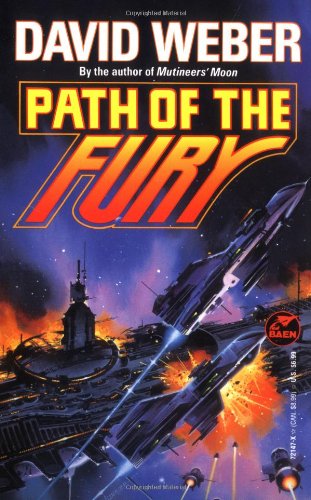 A space adventure with a strong female character in the tradition of Sassinak and Generation Warriors–by the bestselling author of Mutineers’ Moon.

The “invincible”, planet-wrecking pirates made a big mistake when they raided ex-commando leader Alicia DeVries’ quiet home world and murdered her family. The Imperial forces seem helpless against the marauders so Alicia decides to turn pirate herself–by stealing an Imperial ship to carry out her vendetta.

The imperial intelligence services can not find them. The Imperial Navy can not destroy them. Local self-defense can not stop them. It seems that the space pirates are invincible. Their fatal mistake is the invasion of the peaceful house of Alicia de Vries, the captain of the imperial commandos, the brutal destruction of her family.

Seeing the incapacity of the imperial forces, Alicia chooses a pirate way for revenge. She steals a super-modern Imperial ship. Fighting friends consider her crazy. The Imperial Navy receives an order to open fire on it without warning. Pirates also want to get her head. But Alicia has two allies, of which no one knows. This is her computer and an ancient mythological creature.  And this trio of furies will not rest until vengeance is accomplished.