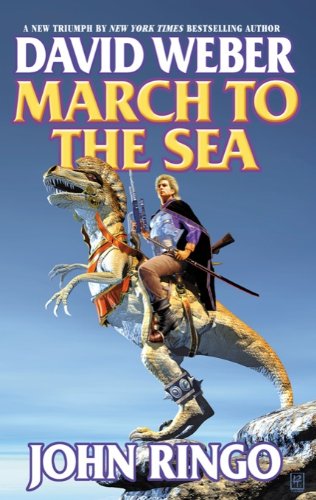 “Always Faithful.” That was the IMC motto, and the Marines of Bravo Company, Bronze Battalion, of the Empress’ Own Regiment, lived by it…even if they did occasionally wonder why they bothered. After all, Prince Roger MacClintock, Tertiary Heir to the Throne of Man, was a real piece of work. A spoiled rotten, arrogant, whiny, terminally handsome, thoroughly useless young pain in the butt.

But that was before the Royal Brat and his body guards were marooned on Marduk by an assassination attempt. Before they found themselves facing 120° heat in jungles where it rained five or six hours a day…during the dry season. Before they had to march half way around the entire planet, through damnbeasts, Capetoads, killerpillars, and atul-grak. Before they encountered treacherous local potentates, barbarian migrations, and an ocean full of sea serpents that could swallow a topsail schooner whole.

Under the right circumstances, even the most spoiled brat can grow up fast, and it turns out that under his petulant, spoiled exterior, Prince Roger is a true MacClintock, a scion of the warrior dynasty which created the Empire of Man a thousand years before. The Marines assigned to guard him have discovered a new belief in him  and in their motto  and they’re determined that they will get him off of Marduk aIive.

Of course, the planet has other ideas…