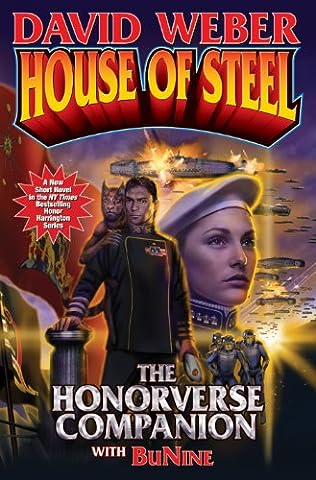 Contains a new short Honorverse novel, plus a compendium of tech, specs, and history to accompany the legendary series.

An all-new David Weber Honorverse short novel, I Will Build My House of Steel, chronicling the early days of the Manticoran Star Kingdom when King Roger was a naval lieutenant.

Have you ever finished the latest Honor Harrington novel from David Weber and wished you could linger in Weber’s Honorverse just a bit longer? Now you can with this treasure trove of tech, specs, and insights on David Weber’s mega-best-selling Honor Harrington series.

Orbital characteristics of key planets, regimental order of the Royal Navy, backstory on the history and drama of the Star Kingdom’s birth and early days; you’ll find it all here, thoughtfully arranged by the Bureau 9 Weber research group, and overseen by David Weber himself.