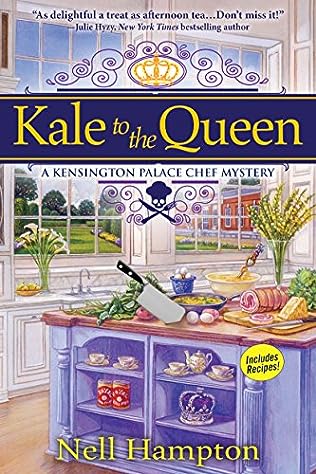 Chef Carrie Ann Cole is about to embark on the adventure of a lifetime–an assignment as the new Personal Chef to the Royal Family at Kensington Palace. But no sooner has Carrie Ann touched down across the pond and donned her apron than a dead body crops up beneath the royal kale beds.

With one assistant dead and the other soon under suspicion for his murder, Carrie Ann is scrambling to keep her kitchen up and running. Not to mention she gets off to an immediate bad start with the tempestuous Royal Chef Butterbottom, who has a bitter taste in his mouth since the prestigious position in the Royal Family’s kitchen was given to an “over-privileged, under-educated American chef.”

But the Royal Family’s appetites wait for no one, and Carrie Ann must solve the murder and still get supper on the table on time–even with the annoyingly handsome Head of Security Ian Gordon tracking her every move like an MI6 agent. Suspects abound as an American chef adds a bit of spice to the traditional royal household in the first in Nell Hampton’s charming and tasty Kensington Palace Chef Mystery series, Kale to the Queen.