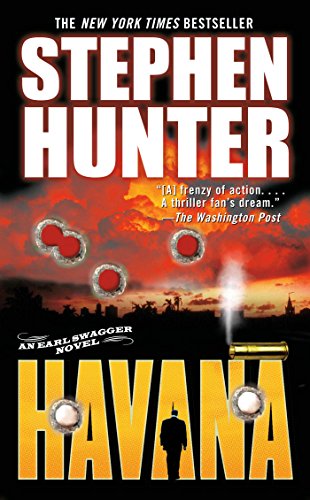 Outgunning all others in the arena of razor-edged action and sheer guts, New York Times bestselling author Stephen Hunter plunges Earl Swagger deep into a steamy underworld of power, politics, and blood. . . .

Cuba, 1953: The island is on fire.  Havana gleams with possibility. Flush with booming casinos, sex, and drugs, Havana is a lucrative paradise for everyone from the Mafia and United Fruit to pimps, porn-makers, and anyone looking to grab a piece of the action – including the Cuban government, which naturally honors the interests of its old ally, the United States of America.

The Mafia-run casinos are rolling, and it’s just a 30-minute flight from Miami to a world of vice, gambling, sex, and drugs. The money is there for anyone who knows how to get it, including the Cuban government and the police, who want to keep their ally Uncle Sam happy. There’s only one threat to this corrupt utopia: a silver-tongued, daring young revolutionary named Fidel Castro.

With the Cold War under way, the Soviet Union has sent a sophisticated veteran agent to find and support the young upstart. To counter, the CIA has summoned Medal of Honor–winning ex–Marine sergeant Earl Swagger, whose heroic exploits have earned him the reputation of a man who doesn’t know how to lose. But he’s not just going to find Castro.