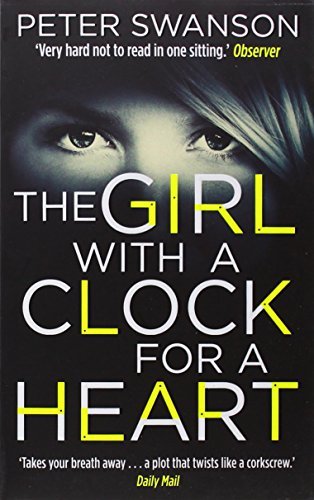 George Foss never thought he’d see her again, but on a late-August night in Boston, there she is, in his local bar, Jack’s Tavern.

Already optioned for film, The Girl with a Clock for a Heart is Peter Swanson’s electrifying tale of romantic noir, with shades of Hitchcock and reminiscent of the classic movie Body Heat. It is the story of a man swept into a vortex of irresistible passion and murder when an old love mysteriously reappears.

On an ordinary Friday evening at his favorite Boston tavern, George Foss’s comfortable, predictable life is shattered when a beautiful woman sits down at the bar, a woman who vanished without a trace twenty years ago.

Liana Dector isn’t just an ex-girlfriend, the first love George couldn’t quite forget. She’s also a dangerous enigma and quite possibly a cold-blooded killer wanted by the police. Suddenly, she’s back—and she needs George’s help. Ruthless men believe she stole some money . . . and they will do whatever it takes to get it back.

George knows Liana is trouble. But he can’t say no—he never could—so he makes a choice that will plunge him into a terrifying whirlpool of lies, secrets, betrayal, and murder from which there is no sure escape.

Bold and masterful, full of malicious foreboding and subtle surprises, The Girl with a Clock for a Heart is an addictive, nonstop thriller—an ever-tightening coil of suspense that grips you right up to its electrifying end