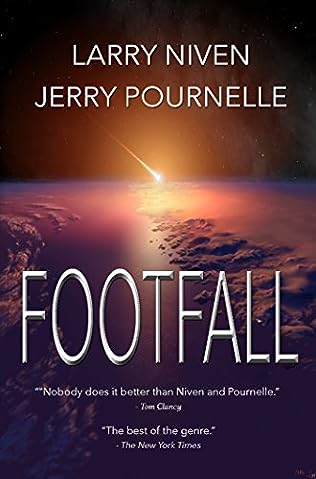 They first appear as a series of dots on astronomical plates, heading from Saturn directly toward Earth. Since the ringed planet carries no life, scientists deduce the mysterious ship to be a visitor from another star: The alien craft is approaching Earth. Attempts to communicate go unanswered. The welcoming committee of Americans and Russians at a space station is blasted, its occupants killed or captured.

Soon the entire Earth, with special emphasis on the United States, is bombarded by asteroids, destroying dams, highways, and infrastructure. The message to humans: total surrender or death to all. A giant rock, the “footfall”, is launched towards Earth, causing even more damage.

The aliens land, determined to conquer or utterly eliminate the human race. Understanding a truly “alien” culture and learning how to confront such an overwhelming power make FOOTFALL stand out as an exciting and truly original novel.