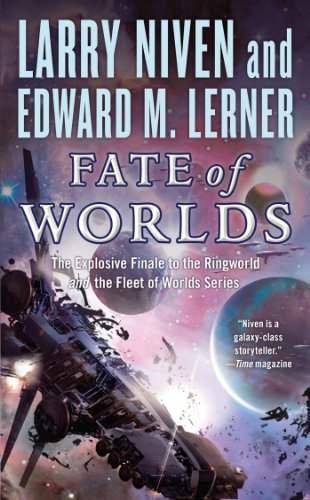 Fate of Worlds is Larry Niven and Edward Lerner’s explosive finale to the Ringworld and the Fleet of Worlds series.

For decades, the spacefaring species of Known Space have battled over the largest artifact―and grandest prize―in the galaxy: the all-but-limitless resources and technology of the Ringworld. Without warning the Ringworld has vanished, leaving behind three rival war fleets.

If the fallen civilization of the Ringworld can no longer be despoiled of its secrets, the Puppeteers will be forced to surrender theirs. Everyone knows that the Puppeteers are cowards.

But the crises converging upon the trillion Puppeteers of the Fleet of Worlds go far beyond even the onrushing armadas.

Adventurer Louis Wu and the exiled Puppeteer known only as Hindmost, marooned together for more than a decade, escaped from the Ringworld before it disappeared. And throughout those years, as he studied Ringworld technology, Hindmost has plotted to reclaim his power….

One way or another, the fabled race of Puppeteers may have come to the end of their days.