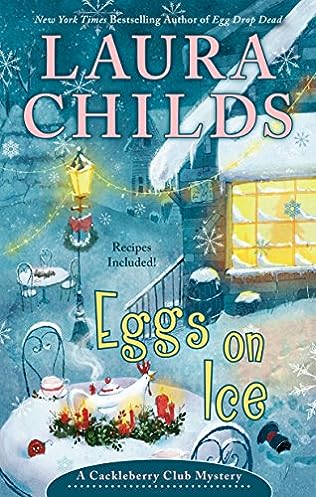 The Christmas season at the Cackleberry Club café is marred by murder in the latest book in the New York Times bestselling series.

Some say that casting crusty attorney Allen Sharpe as Scrooge in the Kindred Players production of “A Christmas Carol” is just playing to type. He’s not the most beloved man in town. In fact, you’d have a dickens of a time finding someone who liked him. Still it’s a shock when the Ghost of Christmas Past stabs him during the first rehearsal. Suzanne, co-owner of the Cackleberry Club café, Kindred’s favorite combination diner, craft store and bookshop, chases the murderer out of the building but loses him in the alley.

As the days pass the list of suspects grows longer. Is it the disgruntled partner? The former secretary whom Sharpe sexually harrassed? Or is it fellow owner of the Cackleberry Club, Toni’s almost ex-husband, Junior? The women of the Cackleberry Club are determined to find the killer before he can add another victim to his Christmas list.