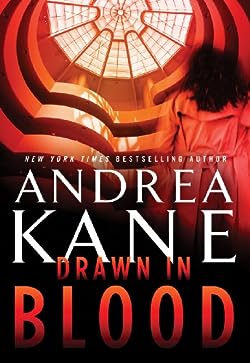 In Drawn in Blood, the eagerly-awaited sequel to her electrifying thriller Twisted, New York Times bestselling author Andrea Kane brings back the dynamic team of former federal agent Sloane Burbank and her lover, FBI Special Agent Derek Parker. An unrelentingly gripping page-turner, this masterwork of romantic suspense embroils a richly drawn cast of characters in a nerve-shattering case of old crimes and new terrors—of secrets, passion, and lies—where the stakes are intensely personal and the lines separating friend and foe, protector and betrayer, are Drawn in Blood.

Former FBI Special Agent Sloane Burbank is finally ready to take the next step in her relationship with her former colleague Derek Parker. The couple has already survived hardship, from breaking up to outwitting a crazed killer targeting Sloane. This second chance at love and happiness seems like a dream come true. But nothing is that easy.

Sloane’s father witnessed a crime over a decade ago that has come back to haunt him – and his family. After a vicious attack at the Burbank home, Sloane faces a tough decision: betray her father’s secret, or withhold vital information from him, especially when it impacts his job…until he is faced with the same tough choice.

Though they love each other deeply, can this couple whO’s faced so much overcome this ultimate test of trust – and will they stay alive long enough to find the answer?