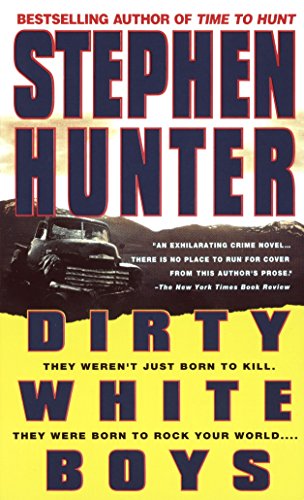 They busted out of McAlester State Penitentiary–three escaped convicts going to ground in a world unprepared for anything like them….

Lamar Pye is prince of the Dirty White Boys. With a lion in his soul, he roars–for he is the meanest, deadliest animal on the loose….
Odell is Lamar’s cousin, a hulking manchild with unfeeling eyes. He lives for daddy Lamar. Surely he will die for him….
Richard’s survival hangs on a sketch: a crude drawing of a lion and a half-naked woman. For this Lamar has let Richard live….

Armed to the teeth, Lamar and his boys have cut a path of terror across the Southwest, and pushed one good cop into a crisis of honor and conscience. Trooper Bud Pewtie should have died once at Lamar’s hands. Now they’re about to meet again. And this time, only one of them will walk away…

Three convicts on the run with an arsenal of weaponry and only one rogue cop can stop them.

Lamar Pye has escaped from Oklahoma State Penitentiary, accompanied by his idiot cousin and a vicious but cowardly artist. To have stayed in prison was certain death, but his chances on the outside are not much greater: his excesses know no bounds – one killing follows another.

But one murder brings his nemesis upon him: Bud Pewtie of the Highway Patrol loses his partner in a blood-soaked shoot-out with Lamar, and from that moment on, nothing will stop him from getting even.