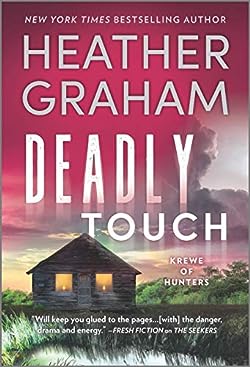 Book 31 in the Krewe of Hunters series
published 2020

It was supposed to be a fun girls’ weekend in Salem, but when a past-life regression session instead sends a terrifying vision of murder to Kylie Connelly, she’s shaken and doesn’t know what to think. Worse, later she identifies the attacker from her vision: he’s a prominent local politician.

Special Agent Jon Dickson of the FBI’s Krewe of Hunters is on the trail of a suspected serial killer based on the scantest of clues and unreliable witness testimony. When he realizes Kylie’s vision might be his best lead, he must gain her trust and get close enough to guide her new talent. Though she doubts herself, the danger Kylie sees is all too real—and the pair will have to navigate a murderer’s twisted passions and deceptions to stop the killer from claiming another victim.

When Raina Hamish tries on a dress in a Miami boutique, she has a terrifyingly accurate vision of a murdered corpse in the murky shadows of the Everglades. She wants to help, but who would believe her when she can hardly believe herself?

Special Agent Axel Tiger has returned to Florida to help hunt a serial killer, but the investigation doesn’t have much to go on. Raina’s vision is their best chance to uncover more. Axel’s experience with the FBI’s elite paranormal team will nurture Raina’s abilities, and she may be able to help save a life—but it puts her directly in the crosshairs of a killer who is closer than they would ever suspect.