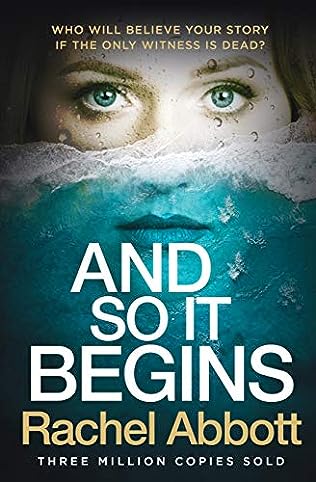 Mark and Evie had a whirlwind romance. Evie brought Mark back to life after the sudden death of his first wife. Cleo, Mark’s sister, knows she should be happy for him. But Cleo doesn’t trust Evie… Evie is in a relationship with Mark and they have a baby girl. Mark’s sister Cleo is jealous and wants Evie out of the picture.

When Evie starts having accidents at home, her friends grow concerned. Could Mark be causing her injuries? Called out to their cliff-top house one night, Sergeant Stephanie King finds two bodies entangled on blood-drenched sheets.

One evening the police are called to the family home and find Mark dead and Evie injured, did she murder him or was it self defense?

Where does murder begin? When the knife is raised to strike, or before, at the first thought of violence? As Evie stands trial, the jury is forced to consider – is there ever a proper defense for murder?

And So It Begins is a darkly compulsive psychological thriller with all the hallmarks of a Rachel Abbott bestseller – a provocative dilemma, richly-layered mystery, knife-edge tension, and brilliant characterization. An intense story that deals with revenge, lies, and cover-ups.