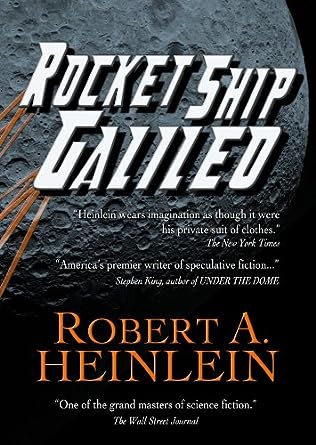 The Galileo Club had just finished its latest backyard launch of a miniature rocket – with mixed results – when the uncle of one of the three club members arrives with a startling proposal: to join him in preparing his “cut-rate” rocket and making mankind’s first trip to the moon.

Despite mysterious sabotage attempts and a restraining “court order”, Doctor Cargraves and the three – Art, Morrie, and Ross – manage to blast off successfully. Reaching the moon proves even tougher than expected, and the moon has plenty of surprises in store. Leaving post-war America does not mean leaving all your enemies behind!

Careful and exciting science, witty, smart dialog, its lessons of responsibility and the transition from “boys” to “men” have made Rocket Ship Galileo one of Heinlein’s most influential books since its first publication in 1947. The importance of this classic in attracting young people to careers in science and technology, as well as developing abiding interests among all its readers in spaceflight, has been widely noted.