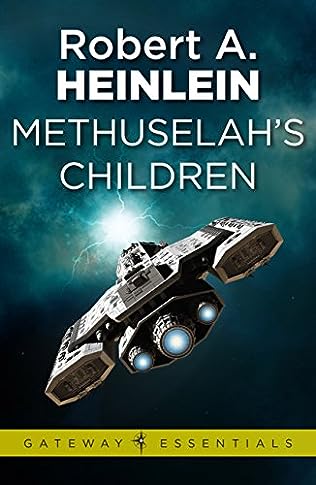 After the fall of the American Ayatollahs as foretold in Stranger in a Strange Land and chronicled in Revolt in 2100, the United States of America, at last, fulfills the promise inherent in its first Revolution: for the first time in human history there is a nation with Liberty and Justice for All.

No one may seize or harm the person or property of another, or invade his privacy, or force him to do his bidding. Americans are fiercely proud of their re-won liberties and the blood it cost them: nothing could make them forswear those truths they hold self-evident. Nothing except the promise of immortality…

Lazarus Long, member of a select group bred for generations to live far beyond normal human lifespans, helps his kind escape persecution after word leaks out and angry crowds accuse them of withholding the “secret” of longevity. Lazarus and his companions set out on an interstellar journey and face many trials and strange cultures, like a futuristic Odysseus and his crew, before returning to Earth.