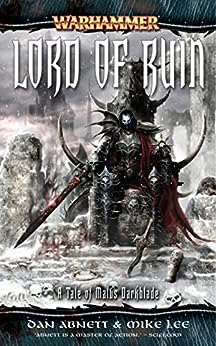 Possessed by the daemon Tz’arkan, dark elf Malus Darkblade has a year to recover five items of unimaginable power and restore the daemon to life, or forfeit his soul.

As his quest nears its end, Malus is taken captive and ordered by the Witch King, Malekith himself, to defend Naggaroth against a Chaos invasion. As battle rages around him, Malus must find the Amulet of Vaurog and return to Tz’arkan before time runs out and he is damned forever!

It had to happen eventually, but at last Malus has come to the attention of the Witch King himself… and that’s never a good thing.