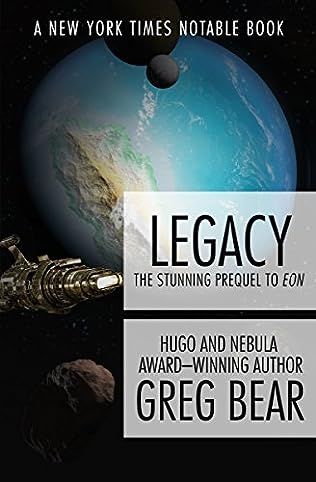 Set in the same universe as the author’s bestselling Eon and Eternity, this novel tells the story of Olmy, well-known to readers of the earlier books. Investigating an illegal opening in the Milky Way, Olmy discovers a strange new world.

The Way is a tunnel through space and time. The entrance is through the hollow asteroid Thistledown and the space station Axis City that sits at the asteroid’s center. From there the Flagships ride the center of the Way, traveling to other worlds and times.

Now the rulers of Axis City have discovered that a huge group of colonists has secretly entered one of the interdicted worlds along the Way. In some ways Lamarkia is very Earth-like–but its biology is extraordinary. A single genetic entity can take many forms, and span a continent. There are only a few of these “ecos” on Lamarkia, and the effect of human interaction on them is unknown.

Olmy Ap Sennon has been sent to secretly assess the extent of the damage. But he will find far more than an intriguing alien biology–for on their new world the secret colonists have returned to the old ways of human history: war, famine, and ecological disaster. On this mission, Olmy will learn about the basics: love, responsibility, and even failure…