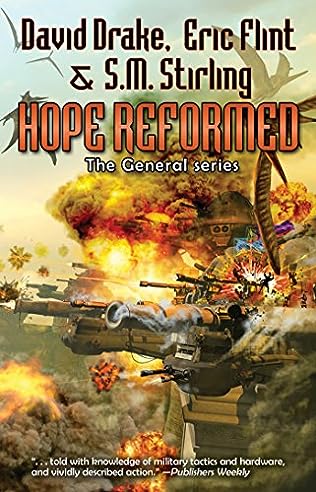 Contains Books #7 and #8, The Reformer and The Tyrant, in the best selling General series

The Reformer by S.M. Stirling and David Drake
On Hafardine, civilization had fallen further than most. That men came from the stars was not even a rumor of memory in Adrian Gellert’s day. The Empire of Vanbret spread across the lands in a sterile splendor that could only end in another collapse, more ignominious and complete than the first.

Adrian Gellert was a philosopher, a Student of the Grove. His greatest desire was a life of contemplation in the service of wisdom . . . until he touched the ‘holy relic’ that contained the disincarnate minds of Raj Whitehall and Center. On that day, Adrian’s search for wisdom would lead him to a life of action, from the law-courts of Vanbret to the pirate cities of the Archipelago and battlefields bloodier than any in the history he’d learned. The prize was the future of humanity.

The Tyrant by Eric Flint and David Drake
On the planet Hafardine, civilization must rediscover progress or collapse. Adrian, guided by disembodied electronic mentors from space, has brought gunpowder and steam power to the Kingdom of the Isles to break the stranglehold of the Empire. But he will have to avoid being killed by the suspicious King he serves, by the barbarians he must recruit, and even by his insanely vengeful brother.