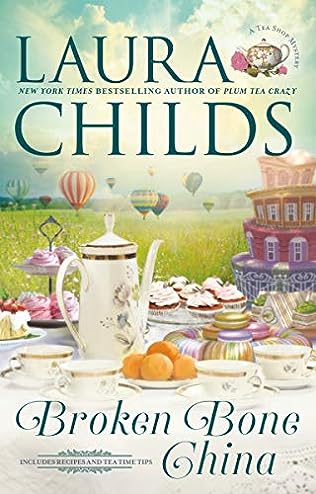 It is Sunday afternoon, and Theodosia and Drayton are catering a formal tea at a hot-air balloon rally. The view aloft is not only stunning, they are also surrounded by a dozen other colorful hot-air balloons. But as the sky turns gray and the clouds start to boil up, a strange object zooms out of nowhere. It is a drone, and it appears to be buzzing around the balloons, checking them out.

As Theodosia and Drayton watch, the drone, hovering like some angry, mechanized insect, deliberately crashes into the balloon next to them. An enormous, fiery explosion erupts, and everyone watches in horror as the balloon plummets to the earth, killing all three of its passengers.

Sirens scream, first responders arrive, and Theodosia is interviewed by the police. During the interview she learns that one of the downed occupants was Don Kingsley, the CEO of a local software company, SyncSoft. Not only do the police suspect Kingsley as the primary target, they learn that he possessed a rare Revolutionary War Union Jack flag that several people were rabidly bidding on.

Intrigued, Theodosia begins her own investigation. Was it the CEO’s soon-to-be ex-wife, who is restoring an enormous mansion at no expense? The CEO’s personal assistant, who also functioned as curator of his prized collection of Americana? Two rival antiques’ dealers known for dirty dealing? Or was the killer the fiancée of one of Theodosia’s dear friends, who turns out to be an employee—and whistle-blower—at SyncSoft?