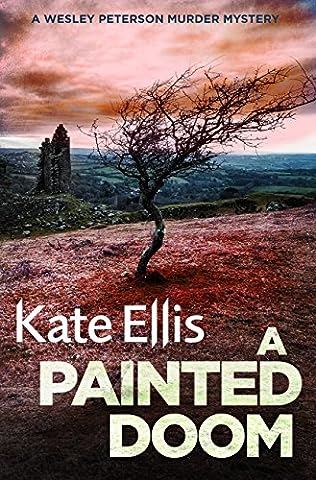 Teenager Lewis Hoxworthy discovers a disturbing painting in a medieval barn; a discovery which excites archaeologist Neil Watson who is excavating an ancient manor house nearby. But when former rock star Jonny Shellmer is found shot through the head in Lewis’s father’s field and Lewis himself goes missing after contacting a man on the internet, Detective Inspector Wesley Peterson and his boss, Gerry Heffernan face one of their most intriguing cases yet.

It seems that the Devon village of Derenham is not only full of resident celebrities seeking the rural idyll but full of secrets, ancient and modern. Lewis’s distraught parents seem to have something to hide. Then the mysterious owner of a new age shop is silenced before she can reveal what she knows about Jonny Shellmer.

Is Jonny’s death linked to Lewis’s disappearance? And does Jonny’s best-known song, ‘Angel’ contain a clue? As Neil Watson uncovers the story of Derenham’s medieval past, it becomes clear that the Derenham Doom – a painted portrayal of hell and judgment more than half a millennium old – holds the key to the mystery. And as events reach a terrifying climax, Wesley Peterson has to act swiftly if he is to save a young life