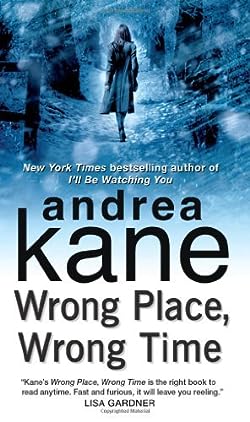 What begins as a romantic weekend in a cozy cabin turns into a deadly nightmare when Sally Montgomery’s companion, Frederick Pierson, is murdered. But instead of regarding Sally as a victim, the police are after her as their prime suspect.

Sally Montgomery anticipated a romantic weekend getaway. What she got instead was a nightmare of unrelenting terror. The murder of her companion and the torching of their cabin sends Sally into hiding—from the police, who believe she’s a suspect . . . and from the killer, who wants her dead.

Desperate and alone in the woods, Sally has nowhere to run and nowhere to turn—except to her ex-husband, former NYPD detective-turned-private investigator Pete Montgomery, and their daughter Devon, who inherited her father’s investigative instincts. Devon’s search for the truth takes her dangerously close to the powerful Pierson clan and its enigmatic heir apparent, Blake Pierson. But with Olympic show-jumping gold at stake and his family’s empire threatened, whose side is Blake on? Time is rapidly running out for Devon. Racing the clock, she must prove her mother’s innocence and outmaneuver the killer before her tactics put her in the wrong place, and one more step will mean certain death.

Time is running out. Danger is closing in. Can Devon prove Sally’s innocence before she becomes the killer’s next victim?