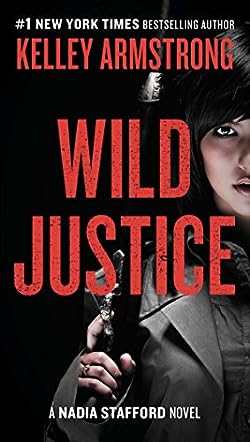 Since Kelley Armstrong wrapped up book two of the Nadia Stafford series, fans have been eager to know what happens to the tough-as-nails contract killer. At last, Wild Justice brings Nadia back for the series’ thrilling conclusion—an action-packed tale that will dazzle fans of the series as well as those who are only familiar with Armstrong’s bestselling paranormal books.

Protect the innocent. If there is any one principle that drives hitwoman Nadia Stafford it’s this. When she was 13 she failed to protect her older cousin Amy from being raped and murdered. As Wild Justice opens, she fails again, disastrously, when she botches a hit on a man who’s been beating his wife. Before she’s had a chance to fix things, the wife is murdered and Nadia plunges into despair. To help her find equilibrium again, her mentor, Jack, brings her a gift: the location and new identity of the serial predator who killed her cousin.

Vengeance, justice? With the predator in her sights, nothing seems more right, more straightforward, more simple. But fierce as Nadia is, she is shaken to the core by what she discovers about the real events of her past. The wounds inscribed on her soul during the long night when her cousin was killed have shaped her, and justice is wild indeed.