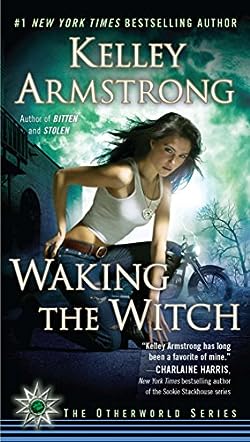 Book 11 in the Women of the Otherworld series
published 2010

One of the most popular writers of paranormal fiction and the #1 New York Times bestselling author returns with a rollicking new novel in her Otherworld series.At twenty-one, Savannah Levine-orphaned daughter of a notorious dark witch and an equally notorious cutthroat sorcerer-considers herself a full-fledged member of the otherworld. The once rebellious teen has grown into a six-foot-tall, motorcycle-riding jaw-dropper, with an impressive knowledge of and ability to perform spells.

The only problem is, she’s having a hard time convincing her adoptive parents, Paige and Lucas, to take her seriously as an adult. She’s working as the research assistant at the detective agency they founded, and when they take off on a romantic vacation alone, leaving her in charge, Savannah finds herself itching for a case to call her own. (She’s also itching for Adam, her longtime friend and colleague, to see her as more than just a little girl, but that’s another matter.)

Suddenly, Savannah gets the chance she’s been waiting for: Recruited by another supernatural detective, she travels to Columbus, Washington, a small, dying town. Two troubled young women have been found in an abandoned warehouse, murdered. Now a third woman’s dead, and on closer inspection small details point to darker forces at play. Savannah feels certain she can handle the case, but with signs of supernatural activity appearing at every turn, things quickly become more serious- and far more dangerous than she realizes.