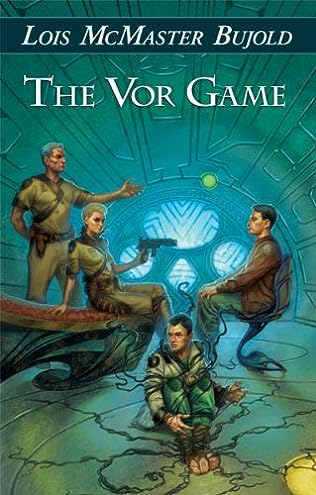 Miles Vorkosigan graduates from the Academy, joins a mutiny, is placed under house arrest, goes on a secret mission, reconnects with his loyal Dendarii Mercenaries, rescues his Emperor, and thwarts an interstellar war.

New-minted ensign Miles Vorkosigan faces enormous challenges as he leads a mutiny against his military commander’s criminal orders, rejoins his Dendarii mercenaries, and attempts to rescue Emperor Gregor after Barrayar’s royal scion has run off straight into trouble.

Together, they can get into a lot of trouble. Trouble only the combined forces of the Free Dendarii Mercenaries can get them out of. At least, that’s what they’re hoping…

In this latest adventure with the galaxy’s craftiest mercenary leader Miles, starts out by so shaking up the High Command on his home planet of Barrayar that he is sent to the other side of the galaxy – where who should he run into but his old pals the Free Dendarii Mercenaries.

And a good thing too, because it turns out that Miles’ childhood chum, that’s Emperor Gregor to you, has been the victim of foul play, and only Miles – with a little Dendarii muscle – can save him. This is very important to Miles; because if Gregor dies, the only person who could become the new emperor is Miles himself – and that he regards as a fate worse than death.