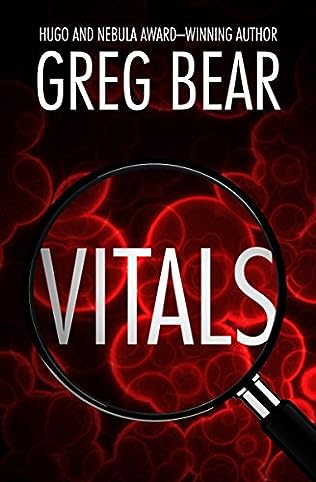 Blending fierce, fast plots with vivid characters and mind-bending ideas, Greg Bear has mastered a powerful alchemy of suspense, science, and action in his gripping thrillers. Darwin’s Radio was hailed across the country as one of the best books of the year. His newest novel, Vitals, begins with a harrowing descent to a netherworld at the very bottom of the sea–and then explodes to the surface in sheer terror.

Hal Cousins is one of a handful of scientists nearing the most sought after discovery in human history: the key to short-circuiting the aging process. Fueled by a wealth of research, an overdose of self-confidence, and the money of influential patrons to whom he makes outrageous promises, Hal experiments with organisms living in the hot thermal plumes in the ocean depths. But as he journeys beneath the sea, his other world is falling apart.

Across the country, scientists are being inexplicably murdered–including Hal’s identical twin brother, who is also working to unlock the key to immortality. Hal himself barely eludes a cold-blooded attack at sea, and when he returns home to Seattle, he finds himself walking into an eerie realm where voices speak to him from the dead . . . where a once-brilliant historian turned crackpot is leading him on a deadly game of hide-and-seek . . . and where the beautiful, rich widow of his twin is more than willing to pick up the pieces of Hal’s life–and take him places he’s never been before.

Suddenly Hal is trapped inside an ever-twisting maze of shocking revelations. For he is not the first person to come close to ending aging forever–and those who came before him will stop at nothing to keep the secret to themselves. Now every person on earth is at risk of being made an unsuspecting player in one man’s spectacular and horrifying master plan.

From the bottom of Russia’s Lake Baikal to a billionaire’s bionic house built into the cliffs of the Washington seashore, from the darkest days of World War II and the reign of Josef Stalin to the capitalist free-for-all that is the United States, Vitals tells an astounding tale of the most unimaginable scientific secret of all–exposed by the quest for immortality itself . . .