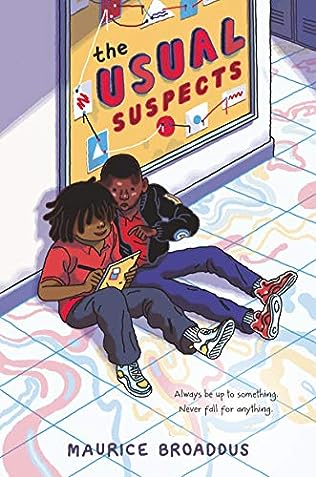 Thelonius Mitchell is tired of being labeled. He’s in special ed, separated from the “normal” kids at school who don’t have any “issues.” That’s enough to make all the teachers and students look at him and his friends with a constant side-eye. (Although his disruptive antics and pranks have given him a rep too.)

When a gun is found at a neighborhood hangout, Thelonius and his pals become instant suspects. Thelonius may be guilty of pulling crazy stunts at school, but a criminal? T isn’t about to let that label stick.

Gr 6-8-Middle-school pranksters Thelonius Mitchell and his best friend Nehemiah have been labeled “emotionally delinquent” and put in Mr. Blackmon’s special education classroom, where they feel they’re always taking the heat for things that aren’t their fault (in fairness, they take the heat for some that are, too). When a handgun is discovered on the grounds of a nearby playground, the students in the special education class are the first ones hauled in for the principal’s line of questioning.

A cast of misfits, make up for a must-read middle-grade novel that reads like the author has done this a million times before.