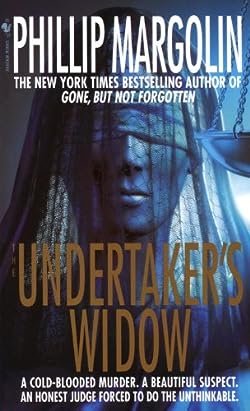 In this legal thriller, a young judge in Portland, Oregon, struggles to save his marriage and his career after he becomes personally involved in the murder case he’s adjudicating. The judge, Richard Quinn, is a deeply principled man who has proven himself an honorable and fair-minded public servant.

At the center of The Undertaker’s Widow is the beleaguered figure of Richard Quinn – a judge so ethical that he is willing to risk his own life to see that justice prevails in his courtroom. But as Quinn discovers when he presides over the trial of tough-talking state senator Ellen Crease, there is not always a clear path to justice. A former police officer, Crease is a flamboyant public figure who stands accused of conspiring to murder her husband, a wealthy tycoon who got his start in the funeral parlor business.

Things, however, are not as they seem, and Quinn soon begins to suspect that Crease may well have been set up. As he zeros in on the deadly secret at the heart of this trial, Judge Richard Quinn finds that his efforts to do the right thing lead him ever deeper into an insidious maze of murder and deceit.