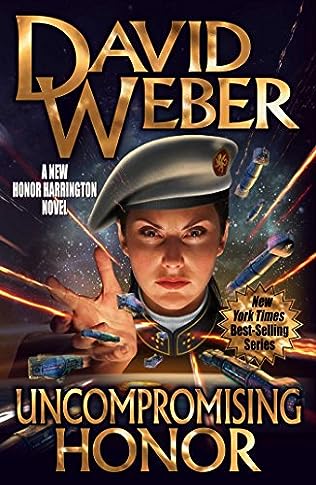 Honor Harrington has worn the Star Kingdom’s uniform for half a century and served her monarch and her people well. In the course of those years, the woman the newsies call the Salamander has grown from a tactically brilliant but politically naïve junior officer to supreme fleet command and a seat on the highest military and political councils of the Grand Alliance.

Very few people know war the way Honor Harrington does. Very few have lost as many men and women, as many friends, as much family, as she has. Yet despite that, hers has been a voice of caution. She knows the Mandarins and the Solarian League Navy are growing increasingly desperate as the truth of their technological inferiority sinks home, but she also knows the sheer size of the League.

And she knows how its citizens will react if the Grand Alliance takes the war to the League, attacks its star systems, destroys its infrastructure . . . kills its civilians. Today’s victory, bought on those terms, can only guarantee a future war of revenge against a resurgent Solarian League and its navy.

Honor knows the Grand Alliance must find a victory that doesn’t require incursions deep into Solarian space, doesn’t leave a legacy of bottomless hatred, and the strategy she supports has been working.