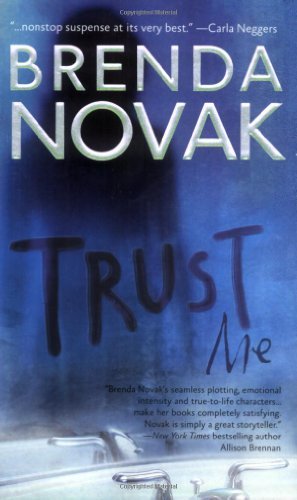 Four years ago…
Skye Kellerman was attacked in her own bed. She managed to fend off her knife-wielding assailant, but the trauma changed everything about her life. As a result of that night, she joined two friends–also survivors–in starting The Last Stand, an organization to help victims of crime.

Dr. Oliver Burke was convicted of the attack, but was given a sentence of only eight to ten years because of his prominence in the community as a well regarded dentist.

But now…
Her would-be rapist is getting out of prison. Skye knows that Dr. Oliver Burke hasn’t forgotten that her testimony cost him his reputation–and his freedom.

Sacramento detective David Willis, who investigated her case, believes Burke is a clear and present danger–and guilty of at least two unsolved murders.

And now Burke is free to terrorize Skye again. Unless David can stop him. Unless Skye can fight back. Because Oliver Burke has every intention of finishing what he started. And that’s a promise.
Trust me.