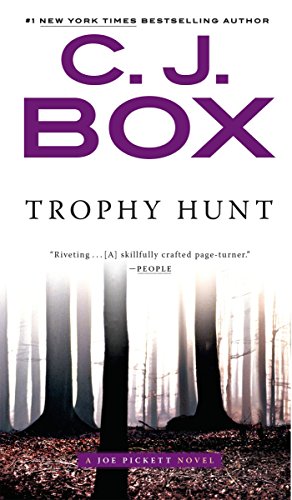 It’s an idyllic late-summer day in Saddlestring, Wyoming, and game warden Joe Pickett is fly-fishing with his two daughters when he stumbles upon the mutilated body of a moose. Whatever – or whoever – attacked the animal was ruthless: half the animal’s face has been sliced away, the skin peeled back from the flesh. Shaken by the sight, Joe starts to investigate what he hopes in an isolated incident.” ”

Days later, after the discovery of a small herd of mutilated cattle, Joe realizes this something much more terrifying than he could have imagined. Local authorities are quick to label the attacks the work of a grizzly bear, but Joe knows otherwise. The cuts on the moose and the cattle were too clean, too precise, to have been made by jagged teeth. Are the animals only practice for a killer about to move on to another, more challenging prey?”

Soon afterward, Joe’s worst fears are confirmed. The bodies of two men are found within hours of each other, in separate locations, their wounds eerily similar to those found on the moose and cattle. There’s a vicious killer, a modern-day Jack the Ripper, on the loose in Saddlestring – and it appears his rampage is just beginning.