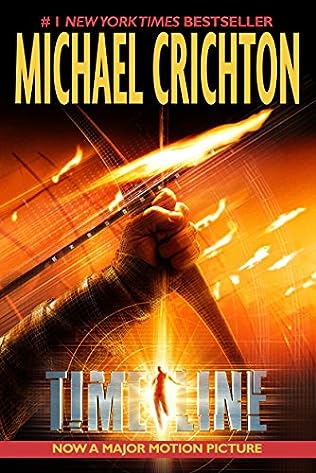 In an Arizona desert, a man wanders in a daze, speaking words that make no sense. Within twenty-four hours he is dead, his body swiftly cremated by his only known associates. Halfway around the world, archaeologists make a shocking discovery at a medieval site.

Suddenly they are swept off to the headquarters of a secretive multinational corporation that has developed an astounding technology. Now this group is about to get a chance not to study the past but to enter it. And with history opened up to the present, the dead awakened to the living, these men and women will soon find themselves fighting for their very survival — six hundred years ago.

Timeline is about three historians employed by a tech billionaire-genius traveling to the year 1357 to rescue a professor who is stranded there on a previous trip.When the project’s chief historian sends a distress call to 1999 from 1357, the boss man doesn’t tell the younger historians the risks they’ll face trying to save him.

The mission turns out to be vastly more complicated than the quick in and out trip they anticipated. Jousting, sword fights, conflagration, and uses of guillotine ensue, not to mention the wearing of tights, baggy hoses, and doublets.