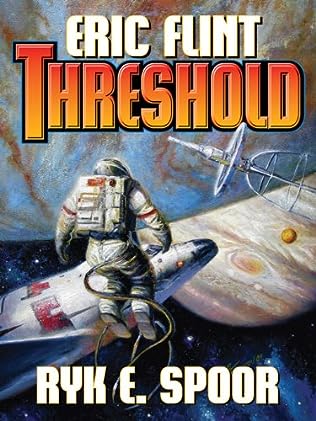 The Sequel to Boundary. Space Adventure by a New York TimesBest-Selling Author and a New Star of Science Fiction.

When the strange fossil she’d discovered had ended up giving her a trip to Mars, Helen Sutter thought she’d gone about as far as any paleontologist would ever go in her lifetime. But when you’ve also married A.J. Baker, overconfident super- sensor expert for the only private agency in space – the Ares Corporation — and your best friend Madeline Fathom Buckley is a former secret agent who’s just signed on as the chief of security for the newly created and already embattled Interplanetary Research Institute of the United Nations, there’s always somewhere farther to go.

The newest discoveries will take her, A.J., and their friends Jackie, Joe, and Madeline to the mysterious asteroid Ceres – and beyond, in a desperate race to Jupiter’s perilous miniature system of radiation- bombarded moons. The next gold rush is on – for alien technology, hidden in lost bases around the system. And there are people willing to do anything to get it – even plan the first interplanetary war, four hundred million miles from home!