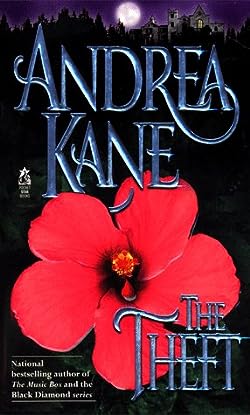 Book 2 in the Thornton series
published 1998

Lady Noelle Bromleigh is determined to unravel the mystery shrouding her birth. She coaxes information from her loving adoptive parents — information on the unscrupulous Franco Baricci, who seduced and abandoned her mother. But knowledge alone is not enough, for Noelle can’t rest until she makes peace with her past. Despite the danger Baricci represents, she travels to London to investigate him. There, she finds both peril and excitement greater than she ever imagined when she meets an enigmatic but seductive stranger with a dark mission.

Lady Noelle is all grown up, she was a child in Yuletide Treasure, and she wants to know who her biological father is. Her adoptive father and uncle is reluctant but knows if he doesn’t help Noelle find answers she’ll try for them on her own and likely get herself into trouble.

Ashford Thornton, the earl of Tremlett, is hot on the trail of the art thief Baricci, and he has good reason to suspect that lovely Noelle could be involved. She may seem an innocent, but her interest in Baricci is highly suspect. And even if Noelle isn’t Baricci’s accomplice, Ashford cannot afford to let her steal his heart. For Baricci is not the only man with secrets — and the one Ashford is hiding could endanger the woman he is fast coming to love.