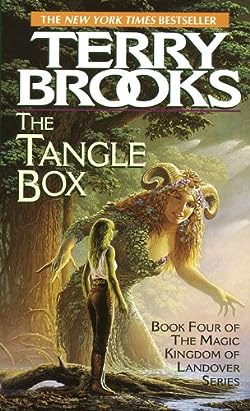 Book 4 in the Magic Kingdom of Landover series
published 1994

Troublesome magical trickster Horris Kew had returned to the Magic Kingdom of Landover, and a chorus of disapproval rang in Ben Holiday’s ears. Both Questor Thews, the court wizard, and Abernathy, the court scribe, urged Ben to lock Horris up or send him away.

Everything should have been quiet and pleasant for Ben Holiday, the former Chicago lawyer who became sovereign of the Magic Kingdom of Landover. But it wasn’t.
Horris Kew, conjurer, confidence-man, and trickster, had returned to Landover from Ben’s own world. Alas, Horris had not returned of his own volition–he had been sent by the Gorse, a sorcerer of great evil, whom Horris had unwittingly freed from the magic Tangle Box, where it had long ago been imprisoned by the fairy folk.

Now it had returned to enslave those who had once dared condemn it. But first, it would rid Landover of all who could stand in its way…

Soon Ben found himself imprisoned within the gloom of the Tangle Box, lost in its mists and its labyrinthine ways. The only one who could free Ben from the Tangle Box was the lady Willow. But she had disappeared, was gone from Landover on a mysterious mission of her own….