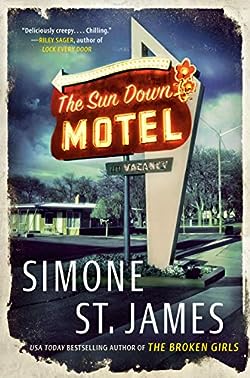 The secrets lurking in a rundown roadside motel ensnare a young woman, just as they did her aunt thirty-five years before, in this new atmospheric suspense novel from the national bestselling and award-winning author of The Broken Girls.

Upstate NY, 1982. Every small town like Fell, New York, has a place like the Sun Down Motel. Some customers are from out of town, passing through on their way to someplace better. Some are locals, trying to hide their secrets. Viv Delaney works as the night clerk to pay for her move to New York City. But something isn’t right at the Sun Down, and before long she’s determined to uncover all of the secrets hidden…

In 1982, 20-year-old Vivian Delaney stumbles upon a job opening as the night shift clerk at The Sun Down Motel, located in eerie Fell, New York. During her shifts, Vivian begins to notice some inexplicable occurrences at the rundown motel: doors randomly opening and closing, strange phone calls, the smell of cigarette smoke when no one is present. It seems that the Sun Down is haunted. Making things even more dramatic are the creepy customers who come to stay.

At the same time, young women in Fell are being murdered. Vivian plays investigator and when she comes up with a lead, she vanishes without a trace

2017: Viv’s niece Carly is drawn to Fell, NY after her mother’s death. She wants to find out what happened to Vivian and ends up following in her Aunt’s footsteps.