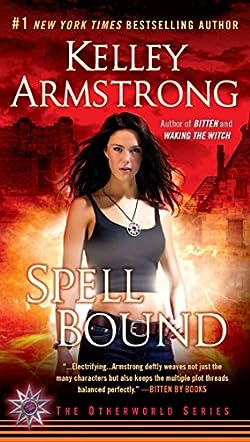 Book 12 in the Women of the Otherworld series
published 2011

The #1 “New York Times” bestselling author sets the stage for a battle of epic proportions.

At last, in the novel every Kelley Armstrong fan will need to own, all the major heroines and heroes of Otherworld are united. It’s been ten years since Bitten, the first novel in Kelley Armstrong’s New York Times bestselling Otherworld series. In that time hundreds of thousands of fans have ravenously devoured the adventures of Armstrong’s witches, demons, and werewolves. Now, in Spell Bound, she brings them all together for her most sweeping tale yet.

Savannah Levine is in terrible danger, and for once she’s powerless to help herself. At the heartbreaking conclusion of Waking the Witch, Savannah swore that she would give up her powers if it would prevent further pain for a young orphan. Little did she know that someone would take her up on that promise. And now, witch-hunting assassins, necromancers, half-demons, and rogue witches all seem to be after her. The threat is not just for Savannah; every member of the Otherworld might be at risk.

While most of her fellow supernaturals are circling the wagons at a gathering of the council in Miami, Savannah is caught on the road, isolated from those who can protect her and unable to use her vast spell-casting talent, the thing she counts on most. In a story that will change the shape of the Otherworld forever, Armstrong gathers Elena, Clay, Paige, Lucas, Jamie, Hope, and other beloved characters, who soon learn that the greatest threat to supernaturals just may come from within.