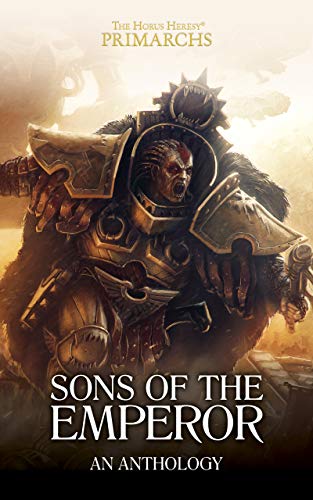 Anthology in the Horus Heresy series (2019)

The primarchs, nigh-immortal sons of the Emperor of Mankind, are laid bare in a series of short stories that showcase great deeds and hideous acts they performed, from the Great Crusade and the Horus Heresy.

READ IT BECAUSE
Whether you see them as heroes, villains or victims of the Emperor’s machinations, these tales will give you new perspective on a host of primarchs, including Angron, Vulkan, Magnus the Red and Horus himself.

From their shadowed origins to the desperate battles that ensued when half of them rebelled against their father, the Sons of the Emperor – the vaunted primarchs – were among the greatest of humanity’s champions, warriors without peer and heroes whose deeds became legend. From the Angel Sanguinius, who took the sole brunt of his Legion’s most brutal acts, to Vulkan, whose humanity made him unique amongst his brothers, and from dour Perturabo, architect, inventor and murderous warlord, to Horus, whose shining light was eclipsed only by the darkness that grew within his soul, this anthology covers eight of the primarchs and their greatest – or darkest – deeds.